Here are some recipes for Sin Free Desserts that you can make on your own. More recipes coming soon. But this should be able to get you started and hopefully hooked on the concept that you can enjoy desserts that also happen to be healthy and good for you!

I am also always happy to hear of improvements you make to these recipes or new ones you would like to share!

Note: Stevia as an ingredient can vary tremendously by brand. These recipes are based on using Sweetleaf brand stevia. For other brands you may need to adjust the amounts.

Preheat oven to 325 degrees F. In the bowl of an electric mixer fitted with the paddle attachment, cream the butter and sugar on high speed until light and fluffy, about 5 minutes. With the mixer on low speed, add the eggs, 1 at a time, scraping down the bowl after each addition. Add the vanilla and almond extracts and mix well.

In a separate bowl, mix together the flour, baking powder, baking soda, and salt. In 3 parts, alternately add the dry ingredients and the coconut milk to the batter, beginning and ending with the dry. Mix until just combined. Fold in 7 ounces of shredded coconut.

Line a muffin pan with paper liners. Fill each liner to the top with batter. Bake for 25 to 35 minutes, until the tops are brown and a toothpick comes out clean. Allow to cool in the pan for 15 minutes. Remove to a baking rack and cool completely.

Meanwhile, make the frosting. In the bowl of an electric mixer fitted with the paddle attachment, on low speed, cream together the cream cheese, butter, and vanilla and almond extracts. Add the confectioners’ sugar and mix until smooth.

Frost the cupcakes and sprinkle with the remaining coconut. 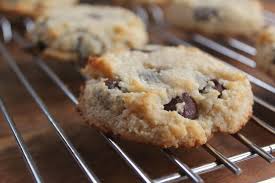